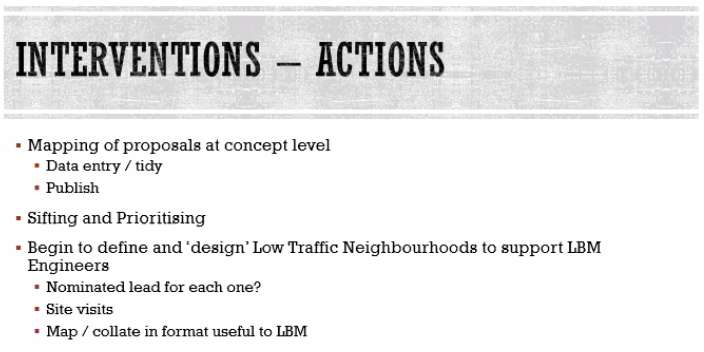 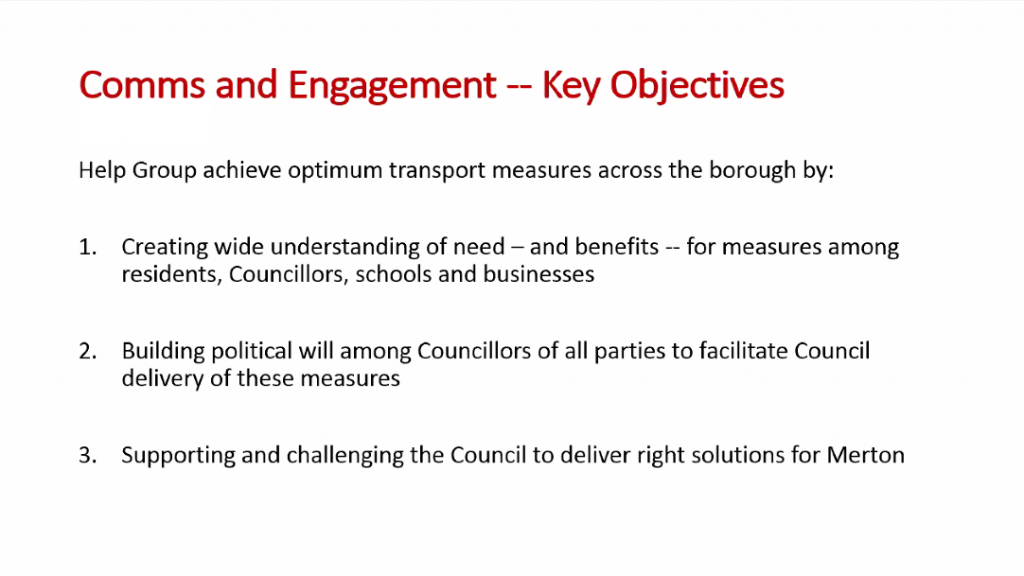 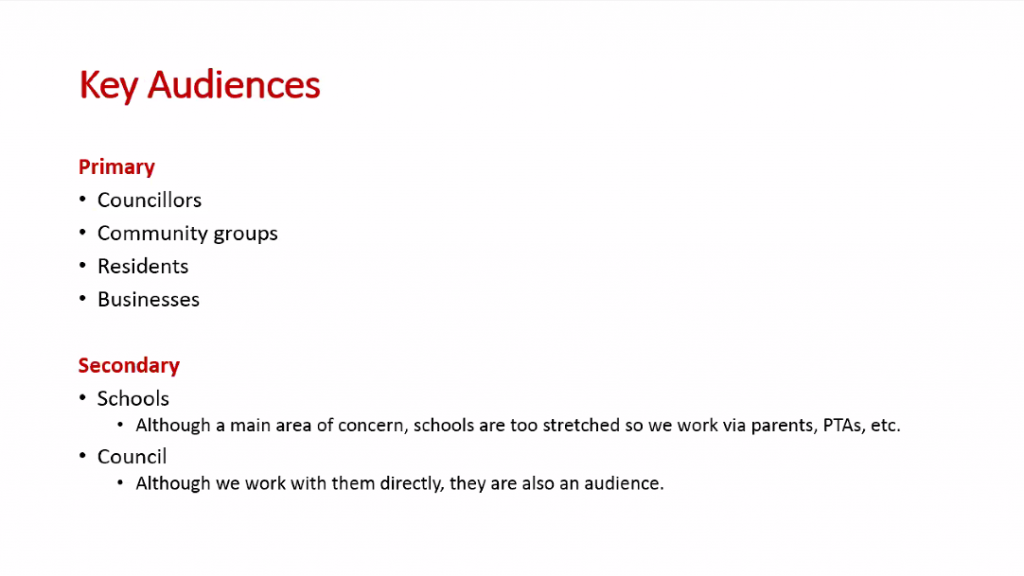 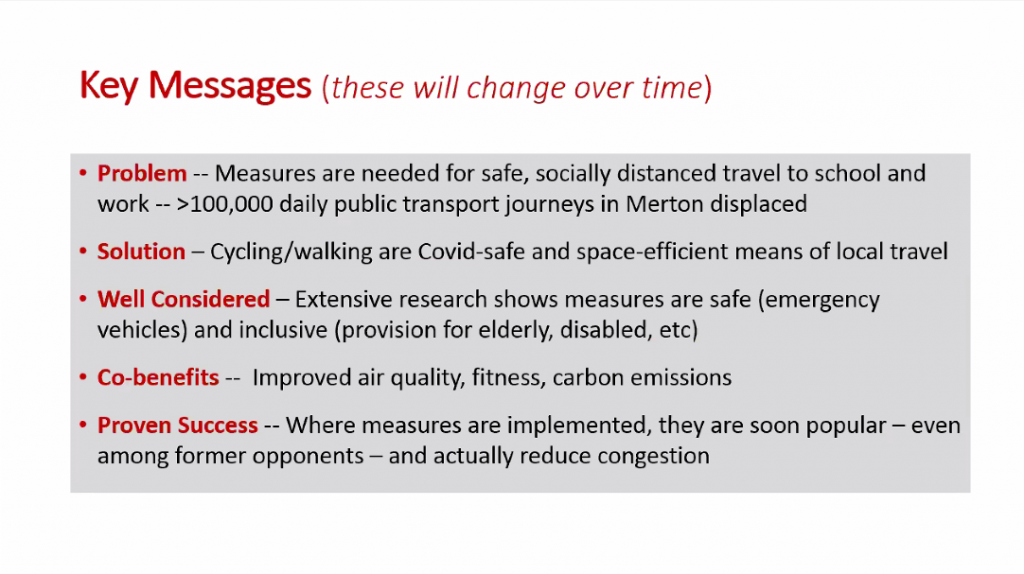 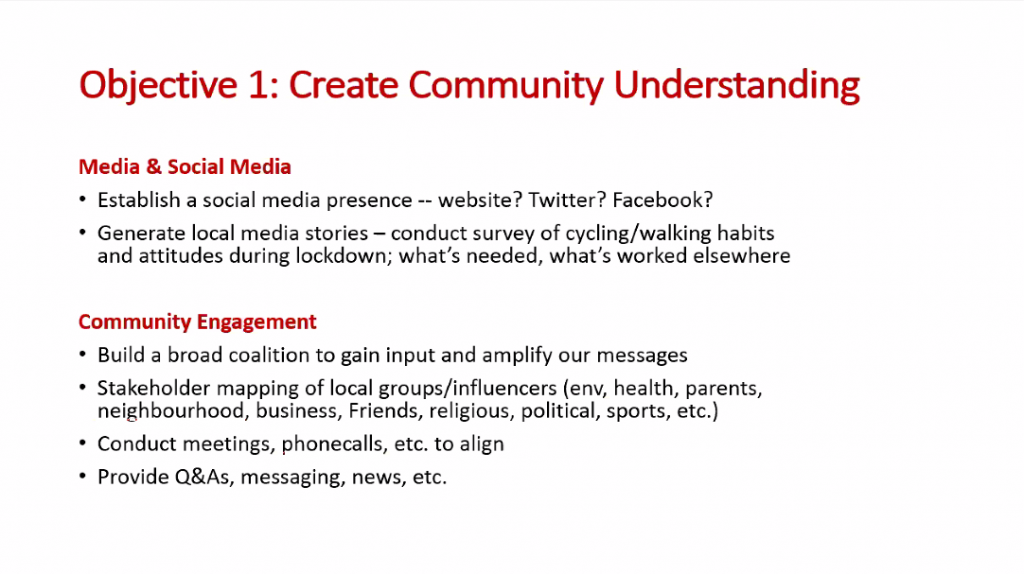 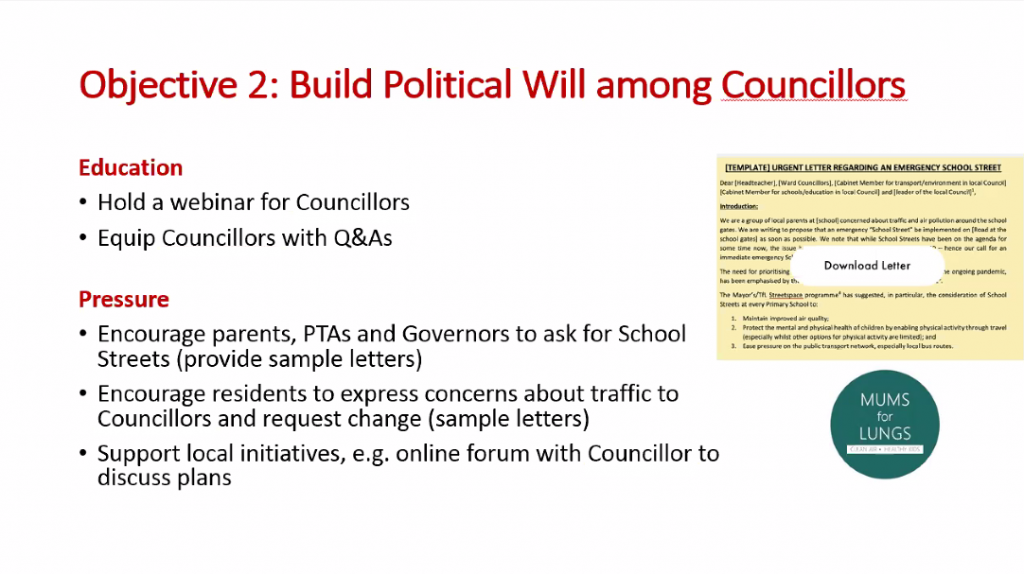 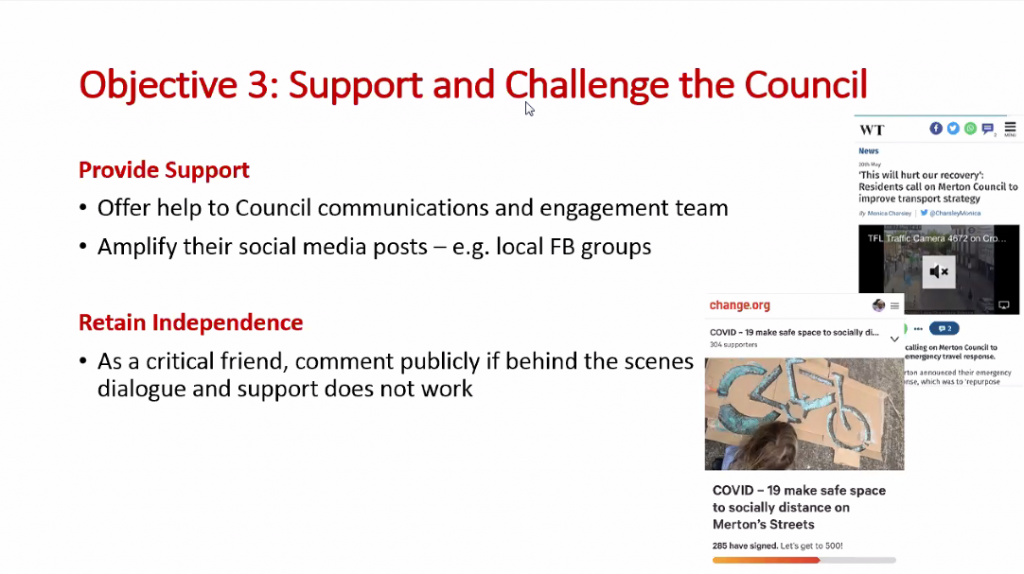 Luke McCarthy welcomed everyone to the group, and outlined the agenda for the call.

Over 110 representations from individuals and groups, over 350 individual projects and suggestions, has now been shared with Future Merton/ Merton Council.

Funding: will use criteria to prioritise for funding, govt funding is for temporary measures; TFL more long term

Currently preparing a report for Cabinet –  will be in the public domain by Monday – updated strategy, engagement reach, prioritisation of bids. The Council won’t know what can be delivered until they know what funding is available.

Schools engagement – road safety teams reached out to 80 schools – not heard back from too many schools. Not all schools back in full. Able to manage queuing for now. Not crowding for now – different in September, so focussing on september for delivering Schools Streets and ANPR for enforcement.

A lot of representations received by Future Merton are for LTNs – covering about 1/3 of the borough. Need to decide which are most important for traffic, safety, etc. We [the Council] won’t deliver all of them – Just biggest bang for the buck

Submitting bid to DFT to claw back money spent so far – then will spend more. TfL funding for longer term LTNs – DFT is for emergency measures. TFL deadline is 2X June so doing for next week as other boroughs already in.

Luke McCarthy outlined that he, Katie Meech, Kathryn Stewart and Lucy Taussig-Marstrand were loosely operating as a co-ordinating committee, and asked whether others would be prepared to get involved.

In response to a question from Jim Wagner, Luke stated that there were no formal positions currently, but was keen to get more pedestrians, parents, those from east of the borough and with contacts with local business.

The following members put themselves forward:

Members confirmed that they were happy with the names of existing and new members.

Overview of next steps for each group

KS provided an overview of the three tasks that it was proposed that the Planning/Interventions Group could take forward. (see slide) She explained that the inclusion of ‘Prioritising’ schemes was at the request of the Council, and that it would have to be done at a very top level as the group did not have a mandate to make decisions about what could or should be prioritised. This was the role of the Council and elected Councillors as they were ultimately responsible.

KM provided an overview of the proposed work of the Comms and engagement group.

Katie outlined the objectives of the sub-group – see presentation.

Pippa observed that it was the same councillors attending, and asked whether the leaders of the political groups had power to compel others to attend.

Dan suggested contacting councillors by email as a route to engage more councillors. Paul McGarry had previously asked not to do so since many forward to the Council for handling. Dan also mentioned that less informed councillors contact certain people in their parties to guide responses.

Paul Murray can bring people from SusTrans to do webinar

In response to a question from Pippa, Katie stated that the group would potentially like to have a social media presence, provided we have the person-power.

KS asked for general views on the three tasks outlined in the first part of the meeting:

LT raised concerns about the criteria for any sort of prioritisation (Task 2) as many factors affect this, such as the propensity to cycle/walk data, the costs and benefits, and the views of those affected.

After some further discussion PMcG agreed that it was the responsibility of his team, not of this group, to prioritise as they have access to the traffic and accident data that would inform prioritisation, and it Officers who are responsible for advising Councillors. The funding bids also did not require the prioritisation of proposals as the DfT and TfL have different priorities. (TfL funding is for strategic routes and Low Traffic Neighbourhood type proposals.)

It was agreed that the second action of ‘sifting and prioritising’ would therefore not be taken forward by this group.

KS explained the difference between the other two tasks:

PMcG noted that so far most of the LTN proposals are in the west of the borough, and that these fit the criteria, such as Merton Park and the Pelhams.

The group discussed the best way to go about Task 1 (mapping the proposals that have already been submitted to Future Merton) in advance of them implementing the Common Place tool. The pro’s and con’s of Widen My Pavement and the Camden CC mapping tool shared by KS at the last meeting were discussed briefly before the group ran out of time. It was agreed that KS would take a decision and email around the group on Friday or Saturday morning with how to do this.

Post-Meeting Note: Decision to use the Camden CC mapping tool as it had the benefits of:

KS sent around the spreadsheet and guidance on how to help with the collation of the relevant data on Saturday 6th.

A group which has been formed in response to Merton Council’s Active & Healthy Travel Response to Covid-19 Plan. The group is non-party-political and open to any resident, community group or business based in Merton. Anyone or any group who share the objectives below is welcome to join, please click on this link to join: https://groups.google.com/forum/#!forum/merton-transport-residents-group/join Purpose To support the development and implementation of the best possible emergency transport plan by Merton Council in response to Covid-19 The group will bring together different community organisations and individuals to share information and ideas to support the development of Merton Council’s emergency transport plan.
View all posts by Merton Residents' Transport Group →