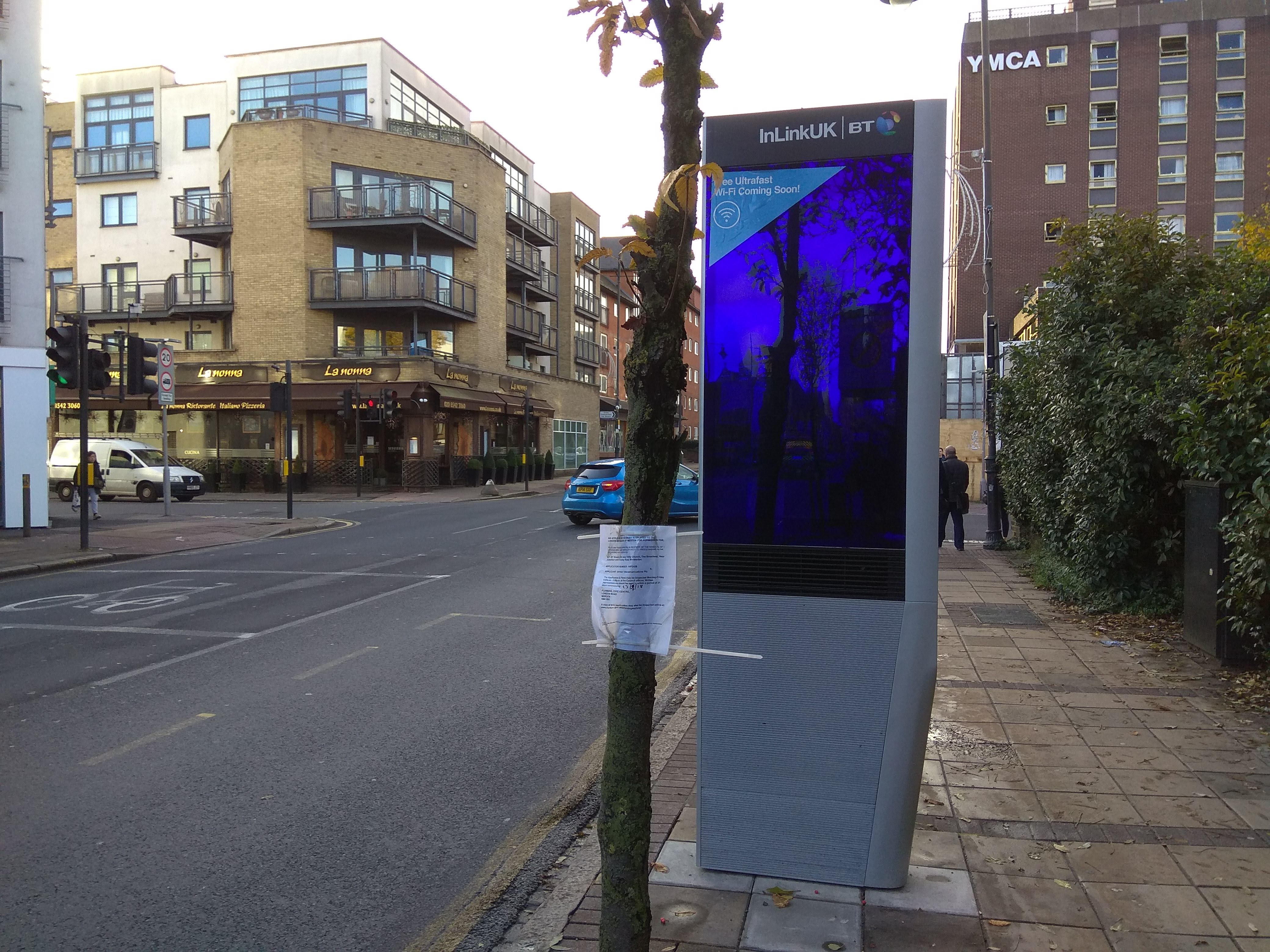 Eleven applications that are visual clutter that would detract from the character and appearance of the area, the design and positioning crates an obstructions in the highway that  would impede the free flow of pedestrian movement and specifically designed to attract attention to the advertising which will prejudice highway safety.

This application cannot be considered as permitted development under the General Permitted Development Order (GPDO) for the following two reasons, either of which are sufficient for refusal. The proper procedure for these applications would be to require an application to be made for full planning permission, together with an application for advertisement consent as required.

The Local Planning Authority is not empowered to extend permitted development rights under the  GPDO to cover operators, equipment and activities not provided for. These rights are strictly and narrowly defined in law and the Local Planning Authority must resist any attempts such as this to evade the normal process for the regulation of general development which should apply in these cases.

The applicant has recently been refused full planning permission for an entire tranche of 25  kiosks by Bristol City Council (eg 18/01715/F). These current applications for telecoms prior  approval in Merton will determine if the applicant can avoid similar refusals by narrowing the

Paragraph A.5 of Part 16 of the GPDO provides:

Where Class A permits the installation, alteration or replacement of any electronic communications apparatus, the permission extends to any—

4.handrails, steps or ramps; or

reasonably required for the purposes of the electronic communications apparatus.

The size of the kiosk structure as a whole is scaled up to accommodate two large and prominent advertising screens. The physical design of the unit is led by the requirement for these screens to be as obtrusive as possible to pedestrians, cyclists and drivers. The scale of the unit is far in excess of what is “reasonably required for the purposes of the electronic communications apparatus”. If the screens were omitted, the communications apparatus would fit inside a  considerably smaller unit. While Street Hub kiosks are designed to replace traditional phone boxes,  they are not designed to accommodate any person using the kiosk inside the unit. Therefore they have no reasonable requirement to approach, let alone exceed, the scale of phone boxes that provide an enclosure for the caller as well as the apparatus.

The Street Hub kiosks have a height of 290cm. The ST6 (Street Talk 6) which they are replacing is  264cm tall. This is a significant and unnecessary increase in height which is not compensated for or justified by the reduction in depth or footprint, nor by any reduction in the total number of kiosks.

If the principle of allowing excessive casing/coverings to accommodate a communications operator’s advertising revenue model were accepted, casings for other forms of communications

apparatus such as masts and cabinets could be scaled up to accommodate screens or printed advertisements. This is not what is intended by nor provided for in the GPDO, which seeks to give privileged treatment only to essential communications infrastructure and necessary ancillary structures, not any unnecessary equipment or structures that a communications operator might wish to install.

Street Hub kiosks include a USB charging point for recharging mobile phones and other devices. This is not “electronic communications apparatus” within the scope of Part 16 A(a) of the GPDO and therefore permitted development rights do not apply.

The proposed development is in part and part of a driver information system and therefore cannot benefit from permitted development rights.

Page 18 of the applicant’s Product Statement states that (emphasis mine): We are anticipating introducing sensors that can anonymously monitor things like:

While ostensibly promoted to provide free wifi and phone calls, the Street Hub kiosks are part of an urban sensor grid designed to track pedestrians and vehicles. Each kiosk has three street-facing cameras and is connected to Google’s data centre by a high-speed fibre optic network. The  Council has received no public warranties from BT about how the sensors will be operated in the future. These installations could cause loss of amenity through loss of privacy, where privacy is given its natural meaning. The council should reject the proposal if it is not covered by a  binding privacy impact assessment. The existing privacy policy is not binding and has already been breached through Street Hub’s promotion of the service to children under the age of 16.

The precise siting of the kiosk on the footway is driven by the need for the advertising screens to be visible to pedestrians and drivers in both directions along the street. This creates a  fundamental conflict between the need for pedestrians to move without undue obstruction and the commercial objectives of the operator to maximise advertising revenue, not least because having made the communications services free to use it has no other significant revenue. It is also the intention of the operator to place the kiosk in pedestrian and driver sightlines. The placement does not meet Merton Council policy on Advertisements DM D5.

While the kiosk’s literal footprint is small, by placing it perpendicular to pedestrian flows on the footway its effective footprint is many times larger.

The edge of the footway is a sensitive area that needs to be kept free from any clutter causing  physical obstruction. Sightlines must be kept clear to ensure that pedestrians can see and be seen by drivers and cyclists. 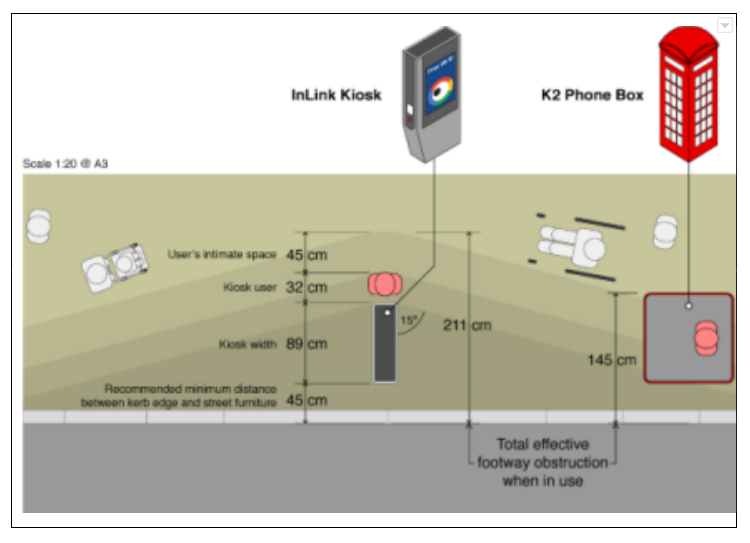 The necessity to the operator to site the kiosk near to the carriageway to increase the visibility of its advertising screens to drivers is also in conflict with the function of the kiosk to provide voice calls. A traditional enclosed phone kiosk in a similar location mitigates this by virtue of the caller being inside the kiosk and shielded to a degree from external noise. The design of this kiosk provides no enclosure and leaves the caller outside with no noise mitigation provided by the unit positioned directly in the unobstructed part of the footway, in the path of any footway users attempting to pass. There is a tendency driven by advertising visibility to locate these kiosks in places that are suboptimal or inappropriate for voice calls: the advertising tail is wagging the telephony dog.

The overall height of the kiosks combined with the illuminated streets make them a very prominent and intrusive feature in the streetscape. The increased height (290cm proposed,  compared to 264cm (new ST6) or 250cm for the kiosks they would replace) and the level of illumination of the screens mean that the proposed kiosks cannot be considered to be a like-for-like replacement of those proposed to be removed.

The operator’s business model is fundamentally harmful to and exploitative of people on the street. Every person on the street is being compelled to pay an “attention tax” through the distraction induced by the large advertising screens on the front and back of each kiosk so that  “free” telephony and internet services can be used by a small minority of people. This is significantly different from street furniture such as litter bins which benefit everyone by helping to keep the street clean even if they are not used by everyone. The design of the unit is optimised for obtrusiveness so that the amount of attention that people pay to it is maximised. This is unwelcome to people on the street and has the potential to cause a hazard when sited near the roadside.

In contrast with other communications equipment such as mobile phone masts and broadband cabinets, Street Hub kiosks make no attempt to blend in with their surroundings. If this approach is accepted in principle then it would follow that the external housing of other communications infrastructure could also be scaled up far beyond the size necessary for its internal components so that more advertising could be placed in public space.

This approach should be resisted to avoid an excessive accumulation of advertising within an area and so that the specific and narrowly-defined permitted development rights enjoyed by privileged applicants are not used as a Trojan horse for the installation of advertising in public space.

While each telecomms prior approval application is accompanied by an advertisement consent application, it is the advertising-led design of the structure that makes the unit an incongruous feature in the environment.

The Local Planning Authority should ensure that new development is designed to reduce the risk of crime and the fear of crime.

Installation of Street Hub kiosks could create a hostile environment on the street by enabling open drug dealing, while also requiring the commitment of police resources to tackle the problem.

The Hampstead and Highgate Express (Ham&High) reports (7 June 2018) that the Street Hub kiosks  installed in Camden are encouraging drug dealing on the street by enabling customers to contact  their dealers anonymously using the free calling feature on the kiosks:

The Ham&High has witnessed apparently vulnerable people queuing up at the Street Hub point outside Camden Town Tube to seemingly dial dealers and buy drugs.

Each time, someone calls a number and waits yards away for a few minutes, before being met by what appears to be a dealer on foot at the same spot a few minutes later. The two parties then make an exchange, and walk away. Sometimes, the suspected dealer – who has been hanging around the area prior to the call – will continue to loiter. …

The Ham&High has visited the site a number of times over the past few weeks and seen  the same few people involved each time.

The revelations will make awkward reading for BT, which featured the Camden Town Street Hub point in a national promo video showcasing the roll-out of the service in March.

The other reported issue is the facility being used for drug dealing, a Designing Out Crime Officer  (DOCO) in Tower Hamlets has made this point: “Our local CCTV operatives at Tower Hamlets have images showing groups of drug users forming an orderly queue to use the phone on these  booths to order drugs using the free 30-second call that is provided.”