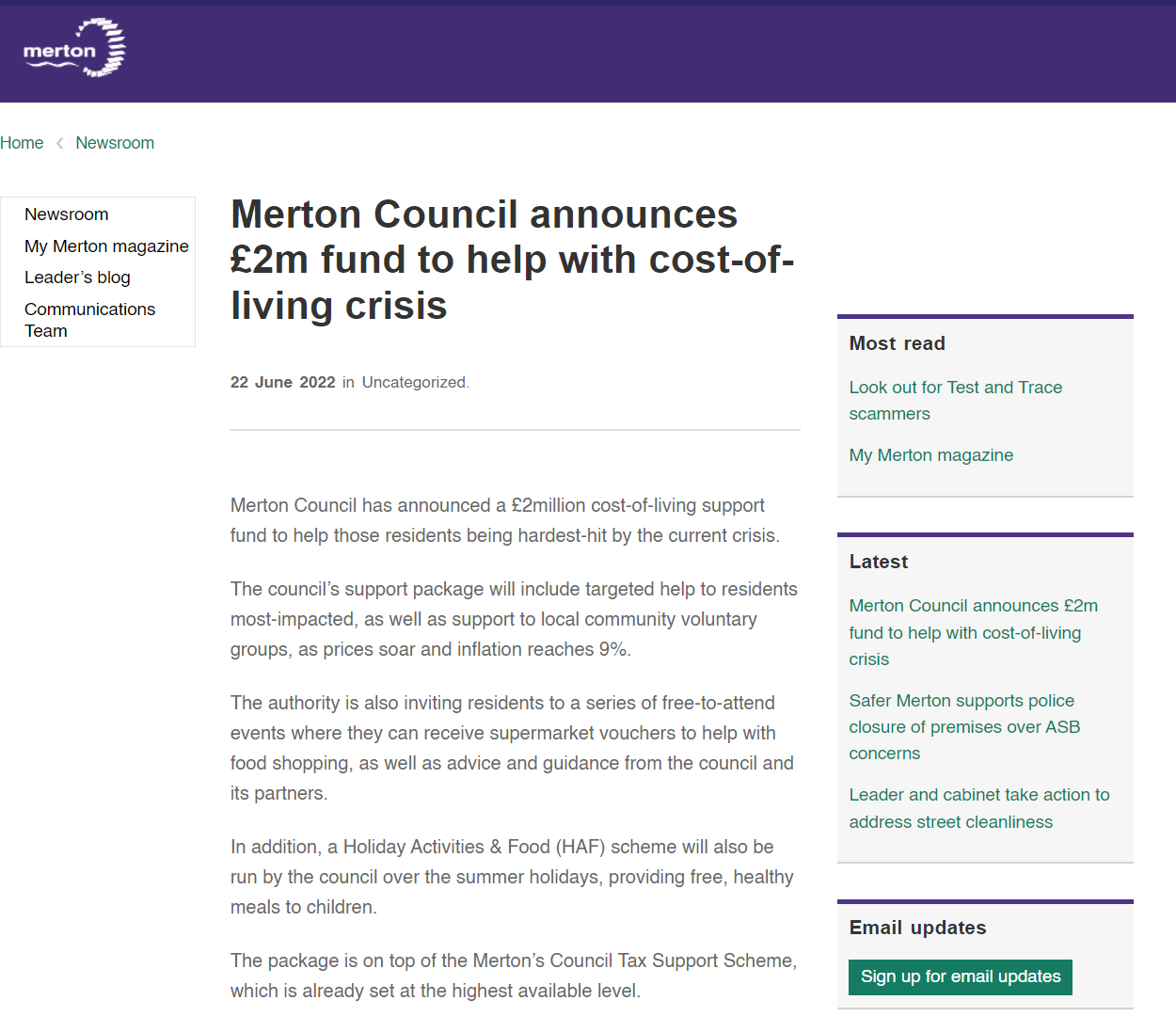 Merton Council has removed a Newsroom article after the source of the funding was queried.  Previously Merton Labour has claimed that Government Funding handed out by the council was a reason to vote for them at this year’s Local Elections.  The source of the Government Grant was provided to prove the claim false.  It is suspected that similar Government Grants are paying for the latest “Cost-Of-Living Support Fund” which Merton Labour has again suggested is “Supporting [their] community”.

Supporting our community and helping those hit hardest by rising financial pressures by setting up a £2 million cost of living fund. https://t.co/GzXXf1oes6

Merton Council has announced a £2million cost-of-living support fund to help those residents being hardest-hit by the current crisis.

The council’s support package will include targeted help to residents most-impacted, as well as support to local community voluntary groups, as prices soar and inflation reaches 9%.

The authority is also inviting residents to a series of free-to-attend events where they can receive supermarket vouchers to help with food shopping, as well as advice and guidance from the council and its partners.

In addition, a Holiday Activities & Food (HAF) scheme will also be run by the council over the summer holidays, providing free, healthy meals to children.

The package is on top of the Merton’s Council Tax Support Scheme, which is already set at the highest available level.

Council Leader Ross Garrod said the fund will help provide “real, tangible support for those who are feeling the impact the most as we plan for the months ahead”.

The council will be talking to community and resident groups over the coming months to identify the best way to use the fund. It is intended to provide support as the colder months arrive, triggering significant rises in bills for many households.

The three cost-of-living events for residents will be held as below:

Each event runs from 10.30am – 1.30pm, and all residents who attend will receive a £10 voucher to spend at the local supermarket.

People will be also able to get advice on-site from partners including Citizens Advice Bureau, the local JobCentre, and Age UK/Wimbledon Guild.

Council experts will also be on hand to discuss benefits and housing support and residents who have not registered to receive their £150 council tax energy rebate will be able to do so on the day.

The council is now writing to more than 70,000 impact6ed households (Band A-D) to make them aware of the support package.

An online hub has been created with a wide range of advice and signposting for residents to ensure they can access the full range of support available from both the council and partners such as Citizens Advice,

Cllr Garrod said: “Nobody should have to choose between heating and eating – but that’s the reality many people on lower incomes will face this winter. This fund will help towards ensuring that this choice doesn’t have to be made.

“We will be listening to local resident groups, community partners, voluntary organisations and experts within the council to determine the best way to use the money, and I’m delighted that we’re able to offer some support in advance of what will be an incredibly tough winter for many people.”

Deputy Leader, Eleanor Stringer, added: “Our partnership work with the voluntary sector was a cornerstone of support for thousands of residents throughout the pandemic. Now, they are stepping up again, and I would strongly urge anybody who is struggling with their bills to come along and talk to us about how we can help.”

At this time we are guessing that the money on offer was announced on 23 March 2022 during the Chancellor’s Spring Statement. We will update this page with the source of the funding once it has been officially confirmed.

Local authorities will receive the extra funding from April, he addshttps://t.co/tgZJwMXgWx pic.twitter.com/lkWYYO1hG8