In October 2013 the Democracy Services team began to use a new agenda management publication system. This automatically synchronised with the webcasting software to minimise the work done by the operator prior to the meeting. It has also improved the experience for the user, as when browsing the agenda for a meeting, a link is supplied to click directly through to watch the item on the webcast.

The system was hosted by Public-i.tv which hosted the videos and provided the software and website to navigate the videos.

The cost of the broadcasts was around £15, 000 a year, the majority paid directly to Public-i.tv for equipment and hosting, and around £1340 of staffing costs in overtime for a single member of staff to sit at the back of the chamber and hit the broadcast/record button.

They broadcast the meetings LIVE and also stored the recording for 6 months to refer back at a later date, Merton.TV believes the recordings are valuable and will be kept indefinitely and will not be purged after six months.

As part of the 2015 Budget setting process, it was decided to end the webcasting.  Suggestions for sponsorship or using an in house service from the Merton Conservatives were ignored.  Merton Labour suggest that an in-house system would cost the same as the outsourced service!

Merton.TV has chosen Google’s YouTube to host the videos for reliability, capacity and to allow for greatest accessibility across all devices.  Some meetings are also broadcast/recorded using Twitter’s Periscope system, this allows LIVE video to be shared quickly, but is limited in the quality of both video and sound, the video is recorded at 540p (800 Kbps).  The audio is compressed, and when it starts poor due to the Merton Council setup designed solely for the members of the meeting rather than incorporating the audience means it can be difficult to follow.  ALL Merton.TV recordings have the audio enhanced to increase the sound. 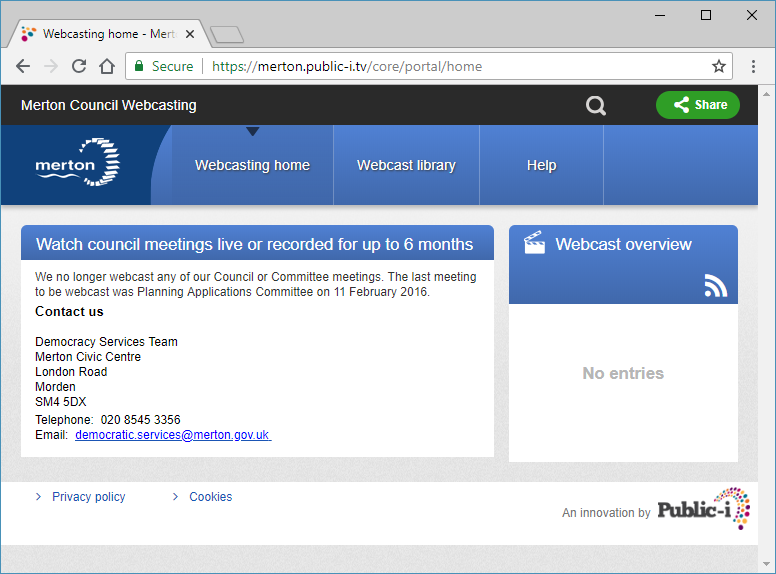 Merton Council Democracy Services have sent out an email reporting:

Subsequent to the upgrade of equipment in the Council Chamber, we have found a low cost way to use the existing microphones and cameras to record and publish meetings of Council and Planning Applications Committee.

The email went on to say:

The images captured are the images that you see on the screens during the meetings so please be aware that not only the speaker but people sat around the speaker will be clearly visible on the recording. During Planning Applications Committee the plans will be shown on screen, these will be captured by the recording, alongside the audio recording of the speakers.